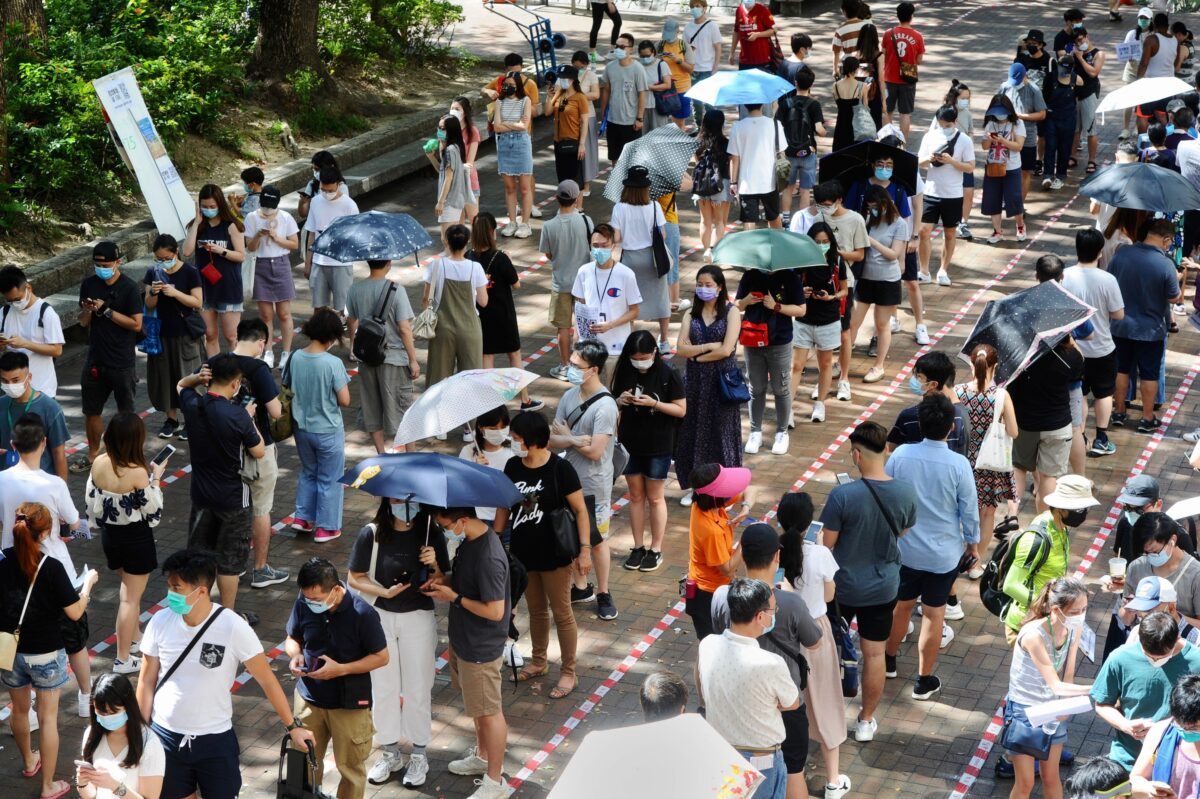 Beijing and the pro-establishment Hong Kong government have claimed that the citys pro-democracy opposition camp may have violated the communist partys newly-implemented national security law by holding their primary polls over the weekend.

Hong Kong leader Carrie Lam in a press conference on Monday accused the primary elections as “causing unfairness” to the legislative elections in September and warned people not to take part in activities that could “interfere, disrupt, [or] cause confusion” to the upcoming elections.

The elections for members of the Legislative Council (LegCo) are currently scheduled for Sept. 6, when all 70 seats are up for vote. The primary elections for the pro-democracy camp, organized by local political association Power for Democracy, were aimed at selecting the most promising candidates for the opposition as it hopes to win a majority of more than 35 seats in LegCo.

Over 600,000 Hong Kong citizens cast ballots over the weekend—a turnout much higher than the organizer had originally predicted. The large voter turnout is widely viewed as a symbolic protest vote against the national security law, which Beijing formally adopted for the city after ceremonial votes at the communist partys National Peoples Congress on June 30.

The security law criminalizes what the Chinese Communist Party (CCP) deems as acts of subversion, secession, terrorism, and collusion with “a foreign country or with external elements” against the state, with maximum penalties of life imprisonment.

“If this so-called primary elections purpose is to achieve the ultimate goal of delivering what they call a 35+ with the objective of objecting to, resisting every policy initiative of the Hong Kong SAR Government, then it may fall into the category of subverting the state power,” Lam said.

She added: “Im not saying that it has breached it but I have to put forward a warning that if that is going to be proven to be the case, then there is certainly a case to answer.”

She added that the Hong Kong government would be investigating complaints they had received against the primary elections, such as breaches of privacy protection.

The liaison office then named out Benny Tai, manager for the primary elections and an associate professor of law at the University of Hong Kong, saying that he had violated Article 22 of the National Security Law, which deals with the crime of subversion.

“Benny Tai and the opposition camp aims to seize the ruling power of Hong Kong and carry out a Hong Kong version of the Color Revolution,” the Liaison Office charged.

Lams remarks about the primary elections have drawn widespread criticism.

“In a free and open democracy, opposition lawmakers not only have a right, but a duty, to oppose ill-thought out and bad government policy,” London-based NGO Hong Kong Watch wrote on its Twitter account.

It added: “Threats by Carrie Lam to use the National Security Law to silence dissent is yet another reason why this draconian law must be opposed.”

Lo Kin-hei, a district councilor and vice chairman of Hong Kongs Democratic Party, took to his Twitter to question Lams logic in accusing politicians in the camp of “sedition” after they held the internal primary vote.

Alan Leong, chairman of the pro-democracy Civic Party, said on Twitter that the CCP and the Lam government are now using the national secRead More – Source

US Reimposing Tariffs on Canadian Aluminum