But Choi Young-hee's pride is one filled with remorse as he talks to CNN Sport following his daughter's death ​last month. After the death of 22-year-old Choi Suk-hyeon, ​her teammates came forward with horrifying ​allegations ​about what they say is their triathlon team's physically and emotionally abusive training practices.Choi's father says that CCTV footage, slippers found on a rooftop and a series of foreshadowing text messages sent to her mother were factors determining that Choi took her own life.South Korean President Moon Jae-in has said it's "heart-breaking that an athlete, who should have been loved by everyone, made an extreme decision.""The best memory for us (parents of athletes) is to see that proud face of winning a medal after hard training," Choi's father tells CNN."I didn't know it back then, but it hurts so much to realize that us parents were foolish. We didn't know well back then, but now that I think about it, those good memories hurt even more." Amid his grief, he says he has been comforted by the messages of support he has received following his daughter's death."Also, when people put up banners (of Choi) on the streets and call to congratulate us. This happened quite often."Right now, there's a banner calling Suk-hyeon 'Chilgok's daughter​,'​" a reference to the small county on the outskirts of Daegu, South Korea, where she grew up.Visit CNN.com/sport for more news, videos and features Choi adds that he was first aware of the abuse his daughter ​said she was subjected to as part of the Gyeongju City ​Hall Triathlon team in 2019. He says she took the whole year off from competing in triathlon in 2018, ​saying she was tired and couldn't continue with the training.On July 1, the Korean Sports and Olympic Committee (KSOC) said it received a report from Choi ​on April 8 ​alleging that she had been abused by her coaching staff, while Choi's father tells CNN he verbally filed a complaint to Gyeongju City Hall on February 6.Following that verbal complaint, Gyeongju City Hall Sports Association launched an investigation and interviewed Choi teammates over the phone. On March 9, Choi then filed a complaint via mail to Gyeongju Police Office." 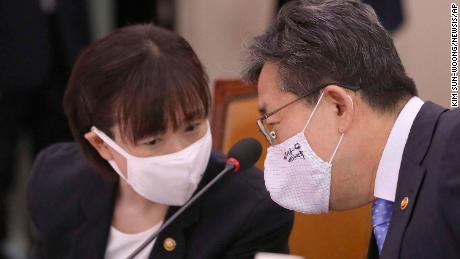 According to the KSOC, an investigation was launched immediately after Choi's allegation in April and that Daegu District Public Prosecutor's Office is currently investigating.In a screenshot of text messages ​Choi exchanged with her mother shortly before ​she took her own life, Choi begged her mother to "lay bare the sins" of ​the people she said abused her. 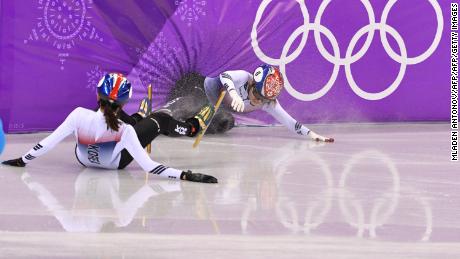 During a ​July 5 press conference held at the National Assembly, two of Choi's former teammates ​​said the 22-year-old athlete, who finished 14th at last year's Triathlon National Championships in Korea, suffered physical and psychological abuse while training with the Gyeongju City ​Hall team. Both athletes spoke on camera with face masks covering only their mouths. Their identities were concealed for fear of retribution. CNN was unable to speak to them. One teammate alleges that coach Kim Kyu-bong forced ​both her and Choi to stay up through the night and eat 200,000 ​won ($167) of bread ​and vomit after having a Coke at lunch. "[The] triathlon team was a kingdom for the coach and certain athletes, while habitual physical and verbal abuse were considered natural in secret behind closed doors," said the teammate."The coach habitually physically and verbally abused Suk-hyeon and other athletes."Kim was banned ​from the sport for life on Monday. "I'm being investigated by the police, and if it is proven, I'll act accordingly," he said at an emergency meeting held by the National Assembly's sports subcommittee on Monday, denying all allegations. ​CNN has made multiple attempts to contact Kim via call and text but did not receive a response. According to her father, Choi once even fled team accommodation: "She ran away, saying that she can't compete in a team like this," he says. "But all that time, she never talked about abuse, she just said that she was tired."She barely came home … They didn't send her home. Even when she came, she couldn't stay long. She wasn't talkative either."He says he persuaded her to return to the team in 2019, when Kim agreed to place less pressure on Choi and the control of her weight.However, it was the influence of team captain Jang Yun-jung and senior athlete Kim Do-hwan, Choi's father says, that meant "nightmare-like days returned" at a training camp in New Zealand.One of Choi's teammates ​speaking at the National Assembly press conference said from firsthand experience that Jang ​had abused members of the team.That teammate said Jang "always drove a wedge between the athletes, pushed athletes to the abyss of hell with physical and verbal abuse and made us self-destruct due to mental stress." Jang also denied the allegations at the emergency meeting held by the National Assembly's sports subcommittee, adding: "It (Choi's death) hurts me as an athlete myself, but I've sincerely cooperated in the investigation." She has also been banned ​from the sport for life by the Korea Triathlon Federation (KTF). Senior athlete Kim, who has been banned for 10 years, denied allegations of physical abuse: "There's nothing for me to apologize for," he said. "It is unfortunate (that Choi died), but I didn't physically abuse her, soRead More – Source