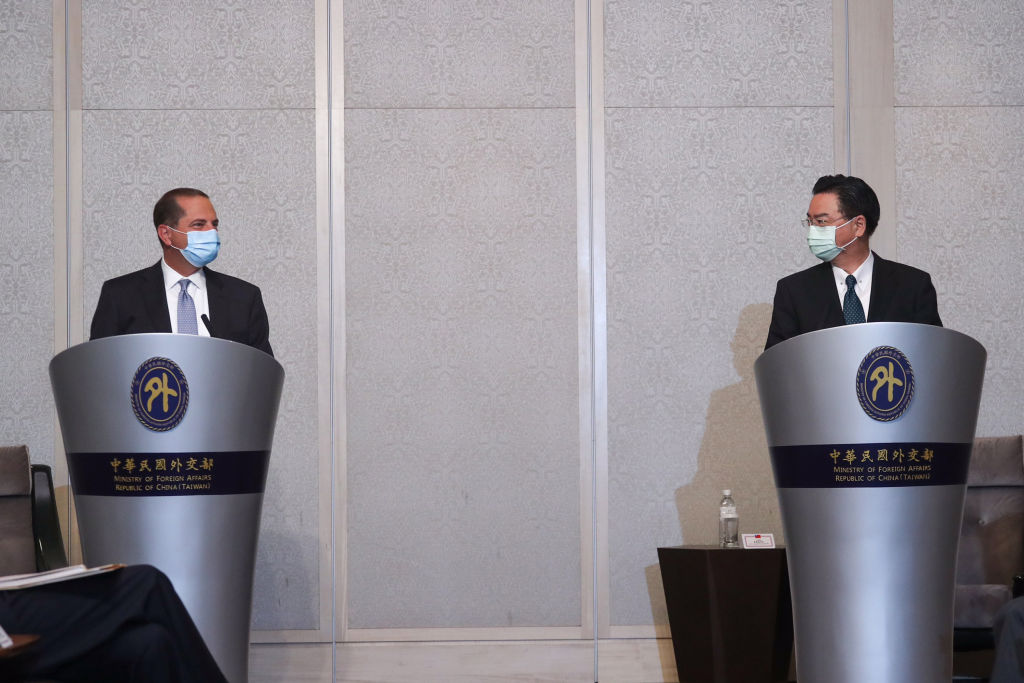 TAIPEI, Taiwan—U.S. Health and Human Services (HHS) Secretary Alex Azar emphasized the importance of having the island be part of the global health community in the current pandemic, in his second full-day visit to Taiwans capital of Taipei.

“It is an honor to be here to bring greetings from President Trump and to be here to recognize Taiwans health leadership,” said Azar in a joint press conference with Taiwans foreign minister Joseph Wu on the morning of Aug. 11.

Calling Taiwans success in containing the Chinese Community Party (CCP) virus “a model for the world,” Azar said: “The United States believes that Taiwans accomplishments should be recognized on the world stage.”

Honored to join Foreign Minister Wu this morning to discuss the special friendship between the United States and #Taiwan. https://t.co/6u3ePl8vfx

The CCP virus, commonly known as the novel coronavirus, originated from the central Chinese city of Wuhan in late 2019. Taiwans first confirmed case of the virus was reported on Jan. 21.

Since then, Taiwanese health officials have effectively limited the spread of the virus through a combination of vigorous tracing of new cases and raising public awareness—without adopting any draconian measures such as putting cities into lockdown. Local public transportation has continued to operate without interruption, and schools and businesses have stayed open.

As of Aug. 10, Taiwan, officially known as the Republic of China, has 480 confirmed COVID-19 cases and seven deaths despite its close proximity (81 miles) to mainland China, which is ruled by the CCP. The island has a population of about 24 million.

“Taiwan should be able to share these lessons and its world-class expertise in international forums,” Azar said, pointing to how Taiwan has been excluded from the World Health Organization (WHO) since 2017.

From 2009 to 2016, Taiwans health ministers took part in the World Health Assembly (WHA), the decision-making body of the WHO, as observers. But since 2017, Taiwan has been barred at Chinas request from taking part in the assembly and from all WHO meetings.

Beijing sees Taiwan as part of its territory, which must be reunited with the mainland despite the fact that the self-ruled island has its own military, democratically-elected officials, and currency.

As a result, Beijing has sought to diminish Taiwans international presence by pressuring countries and international organizations to recognize its claim of sovereignty over the island in exchange for warm relations with the mainland.

Minister Wu delivered a stirring speech before talks with @SecAzar. He thanked the @HHSGov secretary for making the historic visit & acknowledged the importance of #US support in #Taiwans fight to defend its democracy against authoritarian aggression.

“Especially during a pandemic, but at all times, international organizations should not be places to play politics,” Azar said of the CCPs actions.

Azar concluded: “We will continue advocating for the contributions Taiwan can make to the world on important issues like health.”

Azars trip is politically significant. He is the highest-level U.S. cabinet official to visit the island since 1979—the year the United States severed official diplomatic ties with the island in recognition of Beijing. He and his delegation arrived in Taipei on Sunday afternoon.

Currently, the United States maintains a robust, nondiplomatic relationship with Taiwan, and supplies the island with military weapons and equipment for its self-defense against Beijing.

Also speaking at the press conference, Wu pointed out how Taiwan has donated about 51 million surgical masks worldwide since the start of the pandemic, including more than 10 million to the United States, as well as other protective personnel equipment.

Most recently, on Aug. 10, Taiwan donated 50,000 medical masks to the Manhattan Borough in New York City, according to local media.