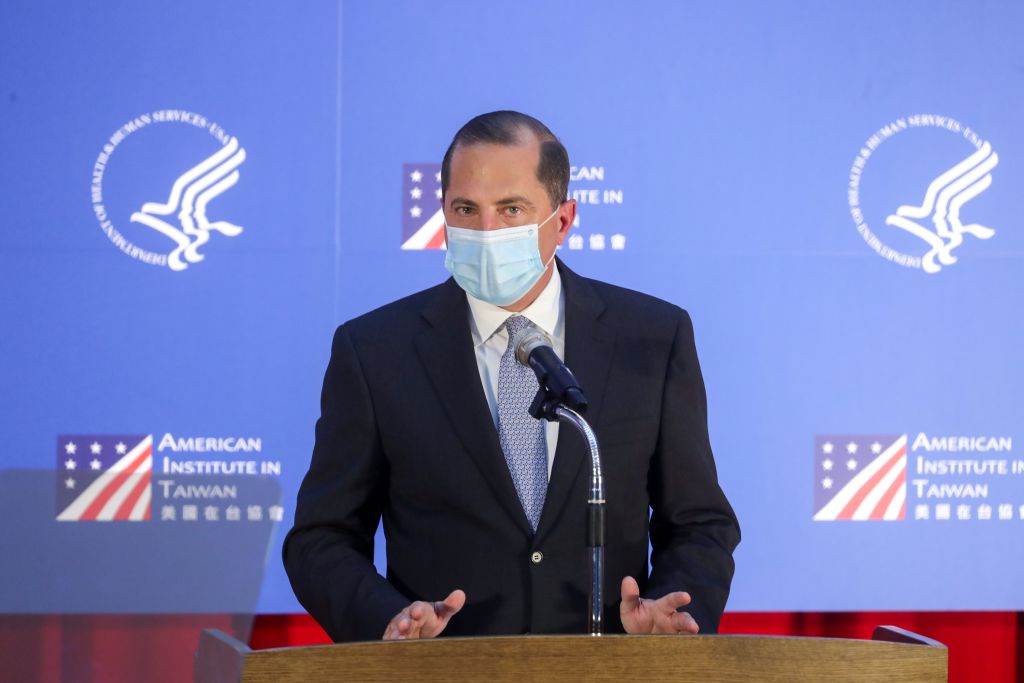 TAIPEI, Taiwan—U.S. Health and Human Services (HHS) Secretary Alex Azar delivered harsh criticism of the Chinese Communist Party (CCP) over its mishandling of the coronavirus outbreak, in a speech given at a local university on Aug. 11.

Azar pointed out the sharp contrast between democratic Taiwan and communist China over their handling of the outbreak caused by the CCP virus, commonly known as the novel coronavirus.

“Taiwans approach to combating the virus through openness, transparency, and cooperation stands in stark contrast to the country where the virus began,” Azar said, in a speech at Taiwans prestigious National Taiwan University. The virus originated from the central Chinese city of Wuhan in late 2019.

He added: “The Chinese Communist Party had the chance to warn the world and work with the world on battling the virus. But they chose not to, and the costs of that choice mount higher every day.”

Azar pointed to the example of Chinese authorities muzzling Chinese doctors who spoke out about the outbreak.

In late December, eight doctors, among them ophthalmologist Li Wenliang, posted on Chinese social media about a new form of pneumonia that was spreading in Wuhan. Li was later summoned to a police station and forced to sign a “confession statement,” saying he wont commit any further “unlawful acts.”

Li passed away in February after unknowingly contracting the virus from an infected patient.

Azar also mentioned that Robert Redfield, director of the U.S. Centers for Disease Control and Prevention, offered U.S. assistance to his Chinese counterpart in January. However, it was not until mid-February that Beijing agreed to let a group of experts from the World Health Organization (WHO) travel to China to investigate the outbreak.

Beijing also knew of the viruss potential to spread among humans, but did not publicly acknowledge it until Jan. 20. One day later, both Taiwan and the United States reported their first confirmed COVID-19 cases.

According to Taiwan officials, the island state warned the WHO that the virus could be contagious in an email on Dec. 31.

Azar criticized Beijing for not being forthright. “[W]hen it comes to health, the expectations of the world community are quite common sense: You cant get anywhere without transparency.”

He added that efforts to combat and contain viruses would not be possible when countries arent willing to share information with each other.

“I believe it is no exaggeration to say that, if this virus had emerged in a place like Taiwan or the United States, it might have been snuffed out easily: rapidly reported to public health authorities, who would have shared what they knew with health professionals and with the general public,” Azar said.

Azar also took exception to Beijings “political bullying” of Taiwan, highlighting how it was “illogical and counterproductive” to have Taiwan excluded from taking part in the WHO.

From 2009 to 2016, Taiwans health ministers took part in the World Health Assembly (WHA), the decision-making body of the WHO, as observers. But since 2017, Taiwan has been barred at Chinas request from taking part in the assembly and from all WHO meetings.

Beijing considers Taiwan part of its territory, despite the island having its own democratically elected government, military, and currency. The Chinese regime has sought to bolster its claim by diminishing Taiwans status as a sovereign state, such as by barring it from participating in international organizations and events.

“Sadly, for political reasons, some dont want Taiwan to help—even when it costs lives,” Azar said, adding that “the influence of the PRC [Peoples Republic of China] far outweighs its investment in this public health institution—and it uses influence not to advance public health objectiRead More – Source