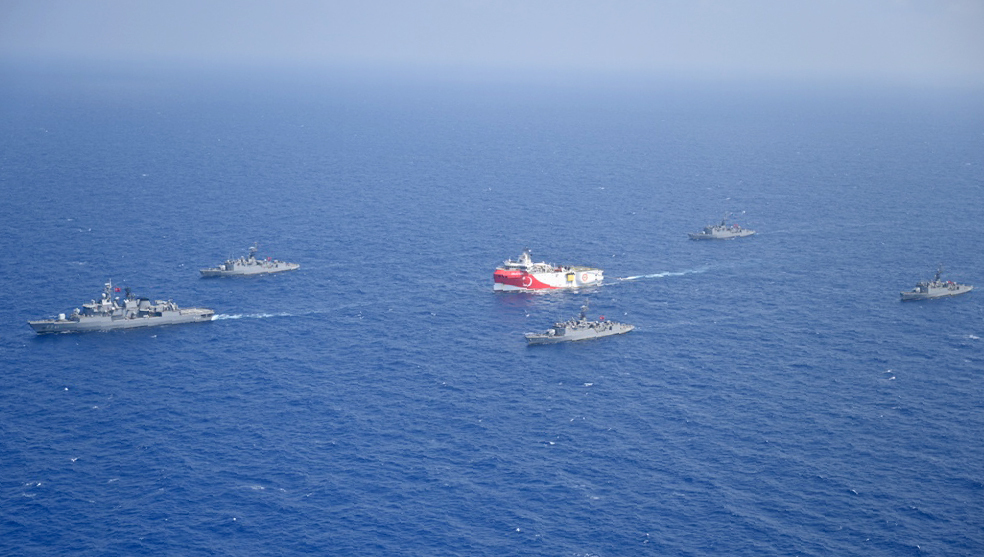 The Oruc Reis was conducting seismic research in an area Greece says is over its continental shelf, and Athens has demanded the ships withdrawal. Both countries have warships shadowing the vessel.

“Our country never threatens but will not suffer blackmail either. This is why it does not succumb to threats or tolerate provocative acts,” Greek Prime Minister Kyriakos Mitsotakis said in a televised statement on the evening of Aug. 12.

Mitsotakis said Greece had deployed naval vessels to the area and placed its military on alert in response to the Turkish deployment of its own fleet.

“Let it be known: The risk of an accident lurks when so many military assets are gathered in such a contained area,” Mitsotakis said. “In such a case, the responsibility lies upon the one who gives rise to these circumstances.”

The prime minister said Greece does “not fear even the toughest dialogue,” as it has faith in its positions, but that “dialogue becomes irrelevant in a climate of tension and provocation.”

“We will never be the ones to escalate the situation. Yet self-restraint is only one aspect of our power,” Mitsotakis said. “No provocation will … go unanswered. We have demonstrated that we will respond, if necessary. And we will do so again if it is required.”

Turkish Energy and Natural Resources Minister Fatih Donmez said on Twitter that the Oruc Reis was “taking the x-ray of our seas.” He said the vessel had also lowered 1,750 kilometers (1,087 miles) of seismic cables into the Mediterranean.

Greece has called on Turkey to withdraw vessels from the area. Turkey said on Aug. 11 it would not back away from its search activities, adding that it plans to issue new exploration licenses for the area despite the escalating dispute with Greece over drilling rights.

Greek Foreign Minister Nikos Dendias is scheduled to see U.S. Secretary of State Mike Pompeo on Aug. 14 in Vienna, with the meeting to focus on Turkeys actions and developments in the eastern Mediterranean, and was to travel to Israel for talks on Aug. 13.

European Union foreign policy chief Josep Borrell wrote on Twitter on Aug. 12 that he was calling an extraordinary Foreign Affairs Council meeting for Aug. 14, to discuss the situation in the eastern Mediterranean, as well as the presidential elections in Belarus and developments in Lebanon after a massive deadly explosion there.

Greece had called for the emergency meeting over what it termed the “growing Turkish provocation and delinquency,” and Dendias will be participating via video link from Vienna.

Turkey announced that the Oruc Reis would be operating in the Mediterranean Sea between Cyprus and Greece until Aug. 23. The vessel arrived in the area on the morning of Aug. 10, escorted by Turkish warships. Greek warships were sent to the area.

Cypriot Foreign Minister Nikos Christodoulides described Turkeys move as a serious escalation to its unlawful actions in the eastern Mediterranean a few days after another of its survey ships, the Barbaros, began hydrocarbons search in Cyprus exclusive economic zone southeast of the island nation.

“Unfortunately, once again Turkey has chosen the route of unilateral unlawful actions, provocatively turning its back on the prospect of dialogue based on international law and good neighborly relations,” Christodoulides told state-run Cyprus News Agency.