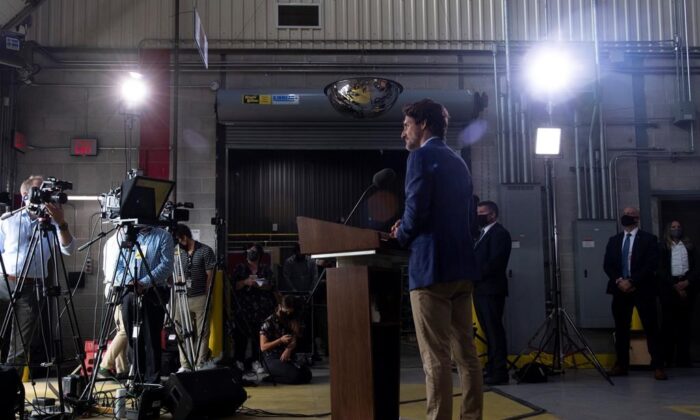 Prime Minister Justin Trudeau takes questions from the media during an announcement on N95 masks at a facility in Brockville, Ont., on, Aug. 21, 2020. (The Canadian Press/Adrian Wyld)

OTTAWA—Prime Minister Justin Trudeau is defending his choice to shut down Parliament shortly before unveiling a $37-billion plan to replace a key emergency aid benefit.

Ottawa announced new measures Thursday to support Canadians who have lost income or employment due to the COVID-19 pandemic—or need to stay off work for illness or caregiving—as the Canada Emergency Response Benefit winds down.

That includes benefits that must be introduced in legislation—something that cannot happen until Parliament resumes late next month.

The Conservatives and the Bloc Quebecois say its unacceptable these proposed changes were announced after Trudeau prorogued Parliament, which will require a new speech from the throne.