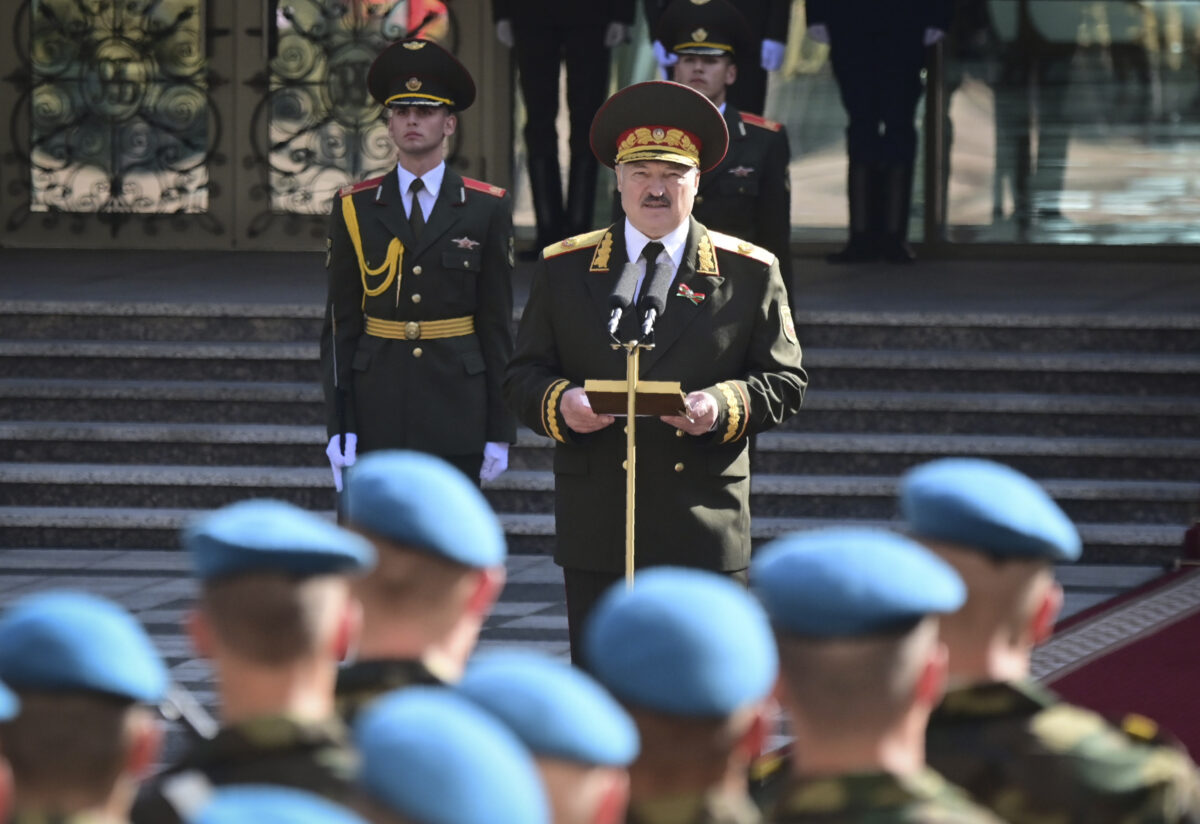 KYIV, Ukraine—Leader Alexander Lukashenko of Belarus was sworn in to his sixth term in office at an inaugural ceremony that wasnt announced in advance, amid weeks of protests against the authoritarian leaders reelection, which the opposition says was rigged.

One opposition leader called the secretive Sept. 23 ceremony “a farce,” and several European countries reiterated that they dont recognize the results of the election and refuse to regard Lukashenko as the legitimate leader. In the evening, thousands of people took to the streets in the capital of Minsk to protest the inauguration and were met with a strong response from the police.

The ceremony was held in front of several hundred dignitaries at the ornate Palace of Independence in Minsk, the state news agency BelTA said. Police and other security forces blocked off parts of the city and public transportation was suspended.

Lukashenko, 66, took the oath of office in Belarusian with his right hand on the constitution, and the head of the Central Election Commission handed him the official ID card of the leader of Belarus.

“The day of assuming the post of the president is the day of our victory, convincing and fateful,” he said. “We were not just electing the president of the country—we were defending our values, our peaceful life, sovereignty, and independence.”

The absence of public involvement in the inauguration only proved that Lukashenko lacked a valid mandate to continue leading the country, according to his political opponents and European officials.

“Even after this ceremony today, Mr. Lukashenko cannot claim democratic legitimization, which would be the condition to recognize him as the legitimate president of Belarus,” said Steffen Seibert, spokesman for German Chancellor Angela Merkel. He added that the secrecy surrounding the swearing-in was “very telling.”

Lukashenko has run Belarus, a former Soviet nation of 9.5 million, with an iron fist for 26 years. Official results of the countrys Aug. 9 presidential election had him winning 80 percent of the vote; his strongest opponent, Sviatlana Tsikhanouskaya, got 10 percent.

Tsikhanouskaya, whos in exile in neighboring Lithuania after being forced to leave Belarus, says the outcome was invalid, as have the tens of thousands of her supporters who continue to demand Lukashenkos resignation during more than six weeks of mass protests.

“The people havent handed him a new mandate,” she said, calling the inauguration was “a farce” and an attempt by Lukashenko to “proclaim himself legitimately.”

“I, Sviatlana Tsikhanouskaya, am the only leader that has been elected by the Belarusian people. And our goal right now is to build the new Belarus together,” she said in a video from Lithuanias capital, Vilnius.

The United States and the European Union have questioned the election and criticized the brutal police crackdown on peaceful protesters during the first few days of demonstrations. The EU is pondering sanctions against top Belarusian officials but failed to agree on imposing them this week.

“Forged elections. Forged inauguration. The former president of Belarus does not become less former. Quite the contrary. His illegitimacy is a fact with all the consequences that this entails,” Linkevicius tweeted.

Other European officials echoed the sentiment.

In neighboring Poland, Prime Minister Mateusz Morawiecki called for an “honest election,” saying on Facebook that the secretive nature of the swearing-in ”only confirms that Lukashenko is aware of what he has done, rigging the results of the election.”

“He is aware that he has no backing from his own nation and that the aggression that he is allowing himself against the people of Belarus is inadmissible,” Morawiecki said.

Czech Foreign Minister Tomas Petricek tweeted that “the elections in Belarus were neither free nor fair. The result is therefore illegitimate, which is why todays inauguration of Alexander Lukashenko is also illegitimate.”

Latvian Foreign Ministry press secretary Janis Bekeris told the Baltic News Service agency that they believe the unexpected inauguration will only deepen the Belarus political crisis, and Latvia will “leave open diplomatic channels for cooperation with Belarus at the technical level.”

The Kremlin declined to comment on the inauguration; spokesman Dmitry Peskov said he wouldnt comment on “an absolutely sovereign, internal decision of the Belarusian leadership.”

Anti-Lukashenko protests have rocked the country daily since the election, with the largest rallies in Minsk attracting up to 200,000 people. In the first three days of protests, police used tear gas, truncheons, and rubber bullets to disperse crowds. Several protesters died, many were injured and more than 7,000 were detained.