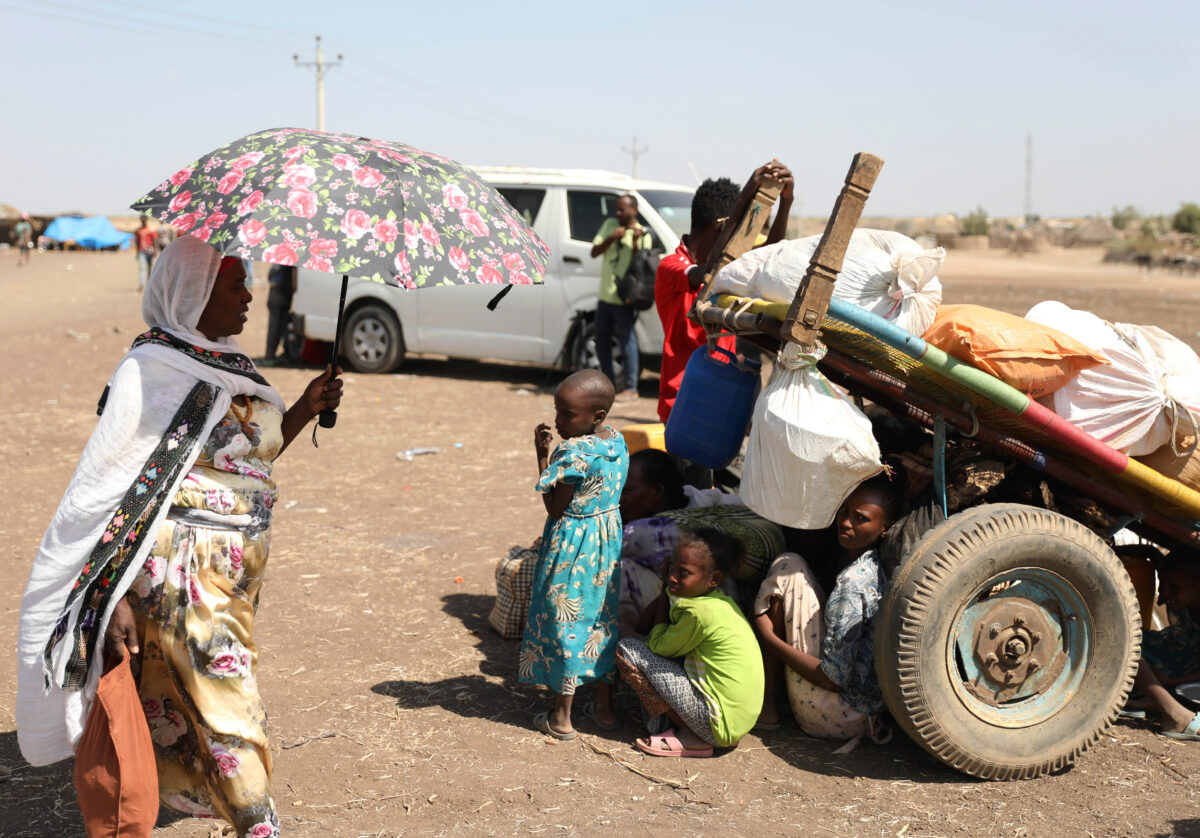 NAIROBI, Kenya—The leader of Ethiopia’s rebellious Tigray region has confirmed firing missiles at neighboring Eritrea’s capital and is threatening more, marking a huge escalation as the deadly fighting in northern Ethiopia between Tigray forces and the federal government spills across an international border.

Tigray regional President Debretsion Gebremichael, in a phone interview on Nov. 15 with The Associated Press, wouldn’t say how many missiles were fired at the city of Asmara on Nov. 14 but said it was the only city in Eritrea that was targeted.

“As long as troops are here fighting, we will take any legitimate military target and we will fire,” he said, accusing Eritrea of sending troops into the Tigray region and denying reports that Tigray regional forces have entered Eritrea.

“We will fight them on all fronts with whatever means we have,” he said. He asserted that around 16 Eritrean divisions are fighting in what he called a “full-scale war.”

The brewing civil war in Ethiopia between a regional government that once dominated the country’s ruling coalition, and a Nobel Peace Prize-winning prime minister whose sweeping reforms marginalized the Tigray region’s power, could fracture a key U.S. security ally and destabilize the strategic Horn of Africa, with the potential to send scores of thousands of refugees into Sudan.

The United States strongly condemned the Tigray region’s “unjustifiable attacks against Eritrea … and its efforts to internationalize the conflict.”

At least three rockets appeared to be aimed at the airport in Asmara, hours after the Tigray regional government warned it might attack. It accuses Eritrea of attacking at the invitation of Ethiopia’s government after the conflict in the Tigray region erupted on Nov. 4 with an attack by regional forces on a federal military base there.

In a security alert, the U.S. Embassy in Eritrea said “a series of loud noises were heard in Asmara” on the night of Nov. 14, and “unconfirmed reports indicate they may have been explosive devices believed to be in the vicinity of the Asmara International Airport. There are no indications the airport was struck.”

The Tigray regional leader wouldn’t say how many missiles remain at his forces’ disposal but said “we have several. We can use it selectively, anywhere.” When asked about targeting Ethiopia’s capital, Addis Ababa, he replied: “I don’t want to tell you, but the missiles are long-range as well.”

Officials in Eritrea, one of the world’s most reclusive nations, have not responded to requests for comment.

Ethiopian Prime Minister Abiy Ahmed in a brief statement declared that “Ethiopia is more than capable of attaining the objectives of the operation by itself.” He didn’t mention the missiles or Eritrea, but added: ”Justice will prevail. Ethiopia will prevail!” His office in a separate statement said, “We will see this operation to its end.”

The Tigray leader said he had no communication with Ethiopia’s federal government. The African Union is pushing for a ceasefire, he said, “but the prime minister is not ready to listen. He believes in the might he has.” He called this a “really messy situation which requires international intervention.”

Tigray’s heavily armed regional government broke away from Ethiopia’s ruling coalition in 2019, and it objects to the postponement of national elections until next year, which extends Abiy’s rule. In September it held a regional election in defiance.

Each side regards the other as illegal, and the federal government says members of the Tigray region’s ruling “clique” must be arrested and their arsenal destroyed. Abiy calls it a “law enforcement action” while his military officials call it war.

The Tigray leader told the AP he didn’t have a number of people killed in the fighting but said “a very massive displacement is happening. The fighting is happening on all fronts in addition to airstrikes.” He added, “We have to defend ourselves, you know?”

The Tigray region is boxed in among Ethiopian forces, Eritrea, and Sudan, which has closed its border but allows in refugees.

The Tigray leader said his government, the Tigray People’s Liberation Front (TPLF), had no communications channel with Eritrea even before the conflict. The two sides are at bitter odds after a long and deadly border war that ended after Abiy took office in 2018.

Abiy has rejected international pleas for an immediate deescalation.

In a separate, bloody example of Ethiopia’s growing tensions, at least 34 people were killed in a “gruesome attack” on a passenger bus in the western Benishangul-Gumuz Region on Nov. 13, the Ethiopian Human Rights Commission said. It didn’t say who attacked.

The conflict could pull in more countries. A senior TPLF official, Getachew Reda, on social media, asserted that Ethiopia’s prime minister “is now enlisting the support of UAE drones based in (the Eritrean city of) Assab in his devastating war against the people of Tigray.” He offered no evidence.

Officials in the United Arab Emirates didn’t comment. For years, the UAE has built up a military presence in Eritrea at the port of Assab and a once-abandoned airfield there, but it has since reportedly drawn down its forces after largely withdrawing from the Saudi-led war in Yemen.

The United Nations and others have warned of a looming humanitarian disaster in the growing conflict as some 25,000 Ethiopian refugees, hungry and scared, have fled the Tigray region into Sudan. Communications and transport links with the Tigray region remain almost completely severed, and millions are at risk as food, fuel, and other supplies run low.

Over the border in Sudan, the refugees—roughly half of them children—huddled in makeshift tents of sheets, even umbrellas, as authorities rushed to organize assistance in the remote area, and more arrivals were on the way.

“The situation is very bad at the moment,” Jens Hesemann with the U.N. refugee agency said in Hamdayet town, which he described as a generous but “very burdened” community.

Shaken, they described being under attack even as they fled.

“Like this, all of Tigray will be killed,” said another refugee, Alem Gabril. “The [Eritrean] President Isaias Afwerki also attacked us, we were hit in the al-Hamra region, we went to the river and we were attacked there, and some of the people died, and the others crossed into Sudan.”

One woman wailed as she was told her son had died in the fighting.