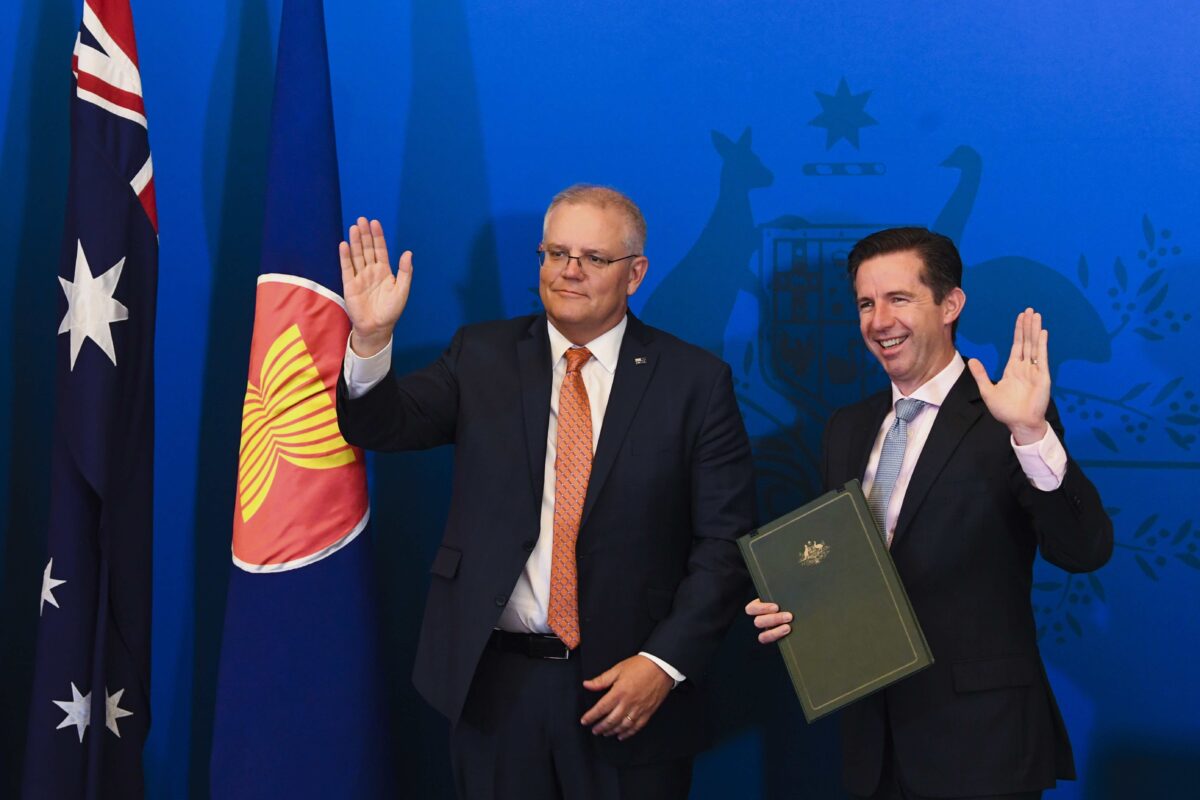 Australia is entering into the biggest trade agreement ever—a 15-nation partnership that accounts for nearly a third of the global economic output.

Prime Minister Scott Morrison and Trade Minister Simon Birmingham will sign the Regional Comprehensive Economic Partnership (RCEP) for the Asia-Pacific region on Sunday, an agreement that covers around 30 percent of the world’s population.

“This is a huge accomplishment,” said Senator Birmingham in a press conference on Nov. 15. “This is an incredibly important agreement in terms of the timing … we see huge pressures globally on the trading system and of course pressures Australia faces too.”

In addition to the trading of goods, the agreement also provides a common set of rules for digital trade and intellectual property, while providing better market access for Australia’s services industries—such as financial services, health care, and education.

Birmingham is disappointed that ASEAN member India is not part of the final agreement but says it still provides a huge platform for Australia to deliver more exports, creating more jobs.

He welcomed the fact Australia and China are partners in the agreement with other ASEAN member nations—a deal that has been eight years in the making.

“It is an important sign of our willingness to work in regional cooperation and regional economic partnership,” Birmingham said. “There are difficulties at present and I am deeply concerned by the fact that, in a number of areas, Chinese regulatory actions have disrupted trade flow.”

He said the federal government is deeply concerned about China’s accusations of dumping by Australian winemakers. There are no grounds for any type of tariff to be imposed, he added.

“However, given the track record this year of adverse regulatory decisions, we are deeply concerned and hope, though, and urge China to focus on the evidence.”

If so, “they will find that Australia’s wine industry operates according to commercial market practices,” Birmingham said.

Australia, Japan, China, South Korea, New Zealand, and the 10 members of the Association of Southeast Asian Nations (ASEAN) will be part of the deal.

Some business groups see the trade agreement as critical for Australia’s recovery from the COVID-19 recession.

“Australians need jobs and selling more of our world-class products and services to the world is one of the best ways we can create them,” Business Council of Australia Chief Executive Jennifer Westacott said.

“Our success over the last 30 years has been built on trade and investment with Asia. This agreement will help lock in a new wave of growth and new jobs just when we need it most.”

“While the FTA gives limited new market access to individual markets, the uniform rules for trading in the region will support regional supply chains and improve the international competitiveness of Australian companies,” he said.

Birmingham reaffirmed that Australia will not alter its position on human rights despite ongoing attacks from the Chinese regime. A Foreign Ministry spokesman last week claimed Australia had damaged the bilateral relationship by opposing the Chinese Communist Party on issues like Hong Kong and Taiwan.

“Australia’s position in relation to matters of human rights or matters of democracy and the hand-over of Hong Kong, as it was, at the time of the hand-over, has been a long-standing and consistent position,” Birmingham said.

By Colin Brinsden. The Epoch Times staff contributed to this article.